Deep breath in, exhale out.

F. Scott Fitzgerald says 'write because you have something to say' not just because...  For the past few months, I've wondered if I really did have more to say?  Turns out, I actually might.  :)  Thanks to everyone who has encouraged me to get back to this...

Resurrection 101
This past week I've been seriously struck by the fact that when asked about 2011, every single person I've encountered lately has said something to the effect of "This has been the worst year of my life..."  I've not found one person yet who said "Wow, this was MY year!"

And here I thought I was the ONLY ONE having a rough time?
Funny how that works, isn't it?

At the hardest times in our lives, we isolate and retreat rather than reach out and beg for help.  More and more with social media, we all seem to 'communicate' more because there's instant access.  Yet how often do we each actually go visit a neighbor, sit on their porch and have coffee with them?  A neighbor.  A friend.  Family.  Truth is we're actually TALKING less.

Some of us find it easier to write what we say because having to look someone else in the eyes and say out loud what we're truly feeling or how much we're really hurting is simply too terrifying... so we retreat and stare only at our computer who cannot question, empathize or criticize.    To the contrary, the great thing about the social net is that we can catch up with long lost friends and family... gaining insight into their every day should we choose to pay attention.


Still it's so much easier conversing with strangers on Twitter or distant friends on Facebook than it is to allow people who actually KNOW us into our lives.
This Christmas I went home for the holiday.  It was wonderful to actually SEE old friends and family... to be in their presence and get real rather than virtual hugs.  I also spent some time with my grandfather who as it turns out, is obsessed with planning his funeral.  Sitting with him in his kitchen reminiscing about years past with my grandmother was both heartbreaking and hilarious.  The fact that he wanted me to write up the details of his funeral for him and what he hoped each of my family and cousins would say physically hurt my heart.  Nonetheless, I realized it was because he wanted desperately to know that his life had meaning and that he was truly loved.   Don't we all?

He wanted to make sure there would be no squabbling about who was going to do what when, nor what his preferences were.  He knew that during a time of grief, people react - and sometimes not all that positively.  He'd thought through every detail.  He wanted his send-off to be a positive celebration of not just his life but of their life:  My Gram and Pap.  As I sat there with all his hand-scribbled notes, all I could do was smile through tears and say "You're not gonna make this easy on me, are you?"  He was crying too as he watched my reaction to his words.  "I need you to do this for me" he said as he pointed to a love poem he'd written to my grandmother when they were younger that he wanted me to read and promise to read the day of his funeral mass.  When I finally agreed to all he'd asked of me, he sat back in his chair grinning.  Exhale.  "Now I can relax" he said.  Then he started in with the jokes... 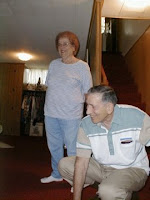 My Pap is 88 years old.  Earlier that day, his home was filled with young kids and teenagers.  They each played instruments from drums to keyboard, cello, violin, viola, and trumpet.  These kids came over with their mom to play for HIM.  They came over because he had asked them to play just for me - because I was in town.  Now, how many pre-teen and teenagers do YOU know who would do that for someone who wasn't even related to them??  I was dumbfounded.

The thing about my Pap is... that he just LOVES people.  He'd stand on his head to make a child laugh if he could.  He's never been wealthy but he's always understood the power of love and a simple gesture of loving kindness.  When my grandmother was in the hospital - and to this day - he would bring a loaf of fresh bread from the bakery and a jar of his canned peppers to the doctors and nurses.  "It's not much" he'd say, "but I want to thank you for taking care of my wife."  He'd do the same with folks at the bank - or literally anyone who did something nice for him or her.  It was his way of giving back, always.  Year after year - even though Gram passed four years ago.  He still follows through.  Never forgetting.  As family, we used to rib him about it and tell him he didn't have to, etc. etc. etc. but he'd brush us all off and do it his way anyway.  But honestly, anyone who received that loaf or those peppers had to look into his eyes and there they'd receive the greatest gift of all.  His love and admiration... and for that, they were all blessed.

He knew what mattered.  He still does.

It's the power of his love that brought those kids to his house.  It's that same love that draws us all to him, seeking his approval, wanting his affection.

This year has been a really really tough year for me.  I was hurt, lost, stressed, and more than I care to recall.  But as with all such things in life, I've come out of that darkness back into the light again... resurrected once more with a new set of lessons learned under my belt.

2011 was a tough year but it is ending.  I am choosing to celebrate the ending of 2011 with a return to the good things in my life that I'd let go (like this blog) and a joyful heart in knowing that the most powerful thing was and is still LOVE.  At the end of the day, love is the thing that lingers - the thing that matters.  It is the thing that all those who know you will remember about you and celebrate for you when you pass on from this life.

So in the meantime, enjoy being ALIVE!  Celebrate that you ARE loved.  And in 2012, think about how to personally connect with those you love rather than sending them a Facebook post or Tweet.


Resurrect the Art of Interpersonal Relationships in the New Year!
Spend actual time with your family and friends.
Look them in the eyes or hold their hand.  Tell them all what they mean to you.
Show them all that you care enough to be PRESENT.
Make the time... (and don't tweet about it when you do :)


Just SAVOR the moments of your life.

Conventional wisdom says you only get one, so make the most of it.  My Pap has... and my hope is that I'll positively impact even half the lives he has when my time here is done.


My New Year's Resolution for 2012 is to commit to a Personal Resurrection.
Join me.
Walk outside.  Breathe in that Air.  And smile.