How did I get here, again?

My head hurts today... as does the rest of me.  I've been traveling for work pretty much non-stop for the last several months.  Not exactly sure how that came about to the extent that it has... is one of those "how did I get here?" questions.

Life can be so funny.  When I DO slow down long enough to allow my mind some peace, it's amazing the clarity I get.  Things like:
And then I circle back to the "why are you doing this?" question.  So then I start to ask myself, "well, yea... WHY exactly?"  This is immediately followed by the entire list of "HAVE TO's" that seem to dictate my every move lately.

Did I create the "Have To" list?
Am I just reacting because I'm overwhelmed?

Who exactly said I "had to" DO anything?

Okay, so how exactly do I deconstruct what I've been doing and determine my
Go Forward Strategy?
Simple.

I don't deconstruct anything.  Just need to let it go... AND get back to writing my vision for Today, this week, month and so on.

There's no point really in trying to figure out WHY.  I just need to change my behavior.

It's really easy to beat ourselves up for things we haven't done, etc.  We ARE our own worst critics after all.  It's also easy to get lost in the past.  The truth is that there is ONLY now.  Only Today.  There's no guarantee for tomorrow though we'd all like to believe so... and yesterday really and truly is over.  So what about NOW? 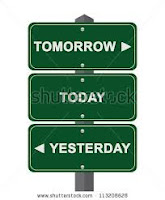 I've written my vision for my future... revised it quite a few times already.  But I haven't written my Now lately.  So I am going to do that next.  Then I'm going to dust off my guitar and relearn my chords.

I've let "now" get away from me and right at this moment, I'm taking that back.  My life can't be about waiting forever for what I don't have nor dwelling on yesterday.  I know where I am going - I have my vision - but I'm missing out on today.  So enough already...

Time to live.
This moment.
This day.

Happy Friday all - I hope you all spend today PRESENT.
;) angela

Nowadays the two catch-phrases that annoy me the most are "It's complicated..." and "It is what it is..."  It seems as though people have become accustomed to indecisiveness.  Better to wait it out and see what happens, right? 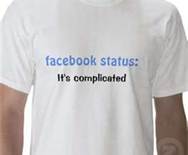 In politics, we see polling for everything.  Messaging is critical.  Same is often true in the corporate business world, in government, and lately even in spiritual conversations.  Yep, even there...

I find myself looking upward and asking:  "REALLY???"

Truth is - I don't think it IS all THAT complicated.  I think it's all pretty simple.  Problem is we - humans - can complicate or dramatize almost anything.

SIDEBAR:  Have you seen those Liberty Mutual insurance commercials??  Totally crack me up because they are SO true.  Sometimes despite our best efforts, stuff still happens... :)


Take ANY situation or circumstance you're facing right now.  Chances are if you're thinking "it's complicated" that most likely means there's some decision you're putting off making.  You don't want to hurt someone.  You're afraid.  Or some other negative emotion that seems far worse than the current feeling.  Hmmm - yea.

Thing is we've become so conditioned to 'reacting' that we're often terrified of ACTING.

I don't believe in Plan B.  I think Plan B is by definition putting it out there that you don't have any faith whatsoever in Plan A.

Faith by definition is "the substance of things HOPED FOR, the evidence of things NOT seen."  So why can't we just go with Plan A?  What are we so afraid of that we default to 'it's complicated?' Or 'it is what it is...?'

We're afraid of scenarios.  We all do it.  We go through the endless waterfall list of "possibilities" and get overwhelmed and stuck.  We are all so often fearful of the 'unknown' or worse yet 'what we THINK we know' that we'd rather just not face it.  Maybe if I wait long enough, someone else will decide... because then "I" don't have to be accountable for the choice.  "I" don't have to be the one causing the change which we equate with PAIN.


The fear tells us that the status quo is FAR better than CHANGE...

Oh really?
Who told you that the equation is:


NOTE:  Think about ANY hero you may have.  What is the one thing they ALL have in common?

Change is a part of life.  There is nothing on this earth or in the heavens that isn't constantly in motion.  There's laws of attraction and energy. Nothing is ever created or destroyed... physics.  Mathematics.  Science.  And of course, Spirituality.  Even the bible tells us so.  When Moses asked "Who are you?"  God answered "I AM."

We are ALL changing every second of every day so WHAT in the world is so scary???  Why would we settle for a false status quo (there's no such thing) in an attempt to stave off CHANGE?

The fascinating thing about the human condition is that we all long for change... to be better, get better... and yet?!!!?

The greatest lessons I think we all learn in our lives is that when we TAKE A RISK the rewards - whether they are rewards in learning, maturity, finance, career, spirituality... (the list goes on) - ARE WORTH it on SOME level.  Always.  Every time.

As human BEINGS (not human doings), we have been fashioned to EXPERIENCE life.  That means that it is NEVER about the status quo.  Never.  Even when we are told, "Peace be still" that still requires ACTION not passivity.

What is it that scares you the most?  Then ask yourself - WHY?  When we all start to break it down and actually DEFINE "Complicated" we can pretty quickly see that it really ISN'T.