A Vision: Why William & Kate Matter

In 1981, my mother woke me up early to watch Lady Diana Spencer marry Prince Charles.  We sat as close to the television as we could on the floor looking up at it and drinking tea.  It is one of my favorite mother-daughter memories...

Yesterday, Princess Diana's son William married his love, Catherine (Kate) Middleton at Westminster Abby.  Despite traveling for work, I again got up at 3:45 am to watch and found myself tearing up more than once.

I've been surprised by how negative and critical some have been of the royals, the wedding, Prince William, and even Kate.  Was it a fairytale wedding?  In many respects, it absolutely was.

In today's cynical world of war and disappointment, the idea of a Prince marrying a commoner and making her a Princess seems more than Disneyesque but actually makes some angry.  For those, I challenge you to consider what else is driving those emotions - beyond these two young adults who are in love and making a commitment before God and the world to be together in their circumstances? 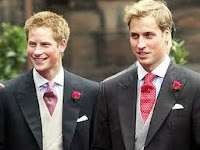 The thing that I love about Prince William and his brother Prince Harry is that they are 'gentle'men.  Whenever I see, read, or hear anything about them I am always struck by their dignity, their compassion, their sense of honor, loyalty, and love.  Princess Diana said in many interviews that she wanted her boys to learn the value of work (so they had chores), the value of people (they were never allowed to order others around despite their privilege), and the value of giving back (in their case, volunteering and charity).  She encouraged them to FEEL!  No stiff upper lip as the British are known to demonstrate.  She encouraged them to 'marry for love' first... which William has now done.  She taught them to be who they are.

Watching the Prince William over the years (and Harry also), I've been amazed at how truly kind and considerate he is.  Both boys are accomplished men now.

William has a college degree (thanks to Kate who encouraged him to change his major and finish school).  He joined the military and is an RAF helicopter pilot who performs search and rescue missions, which are some of the most dangerous.  He vacations with his father, his brother is his best friend.  He rides horses, hunts... AND cooks.  He goes shopping at the grocery when he and Kate are in Anglesey in North Wales where they have lived.  He has traveled the world - yes, but often in the pursuit of understanding and to work.  Yes work - including building homes and cleaning toilets in Chile, Africa, and other poor communities.


William and his brother Harry are well rounded MEN.  They are chivalrous and respectful, protective and kind, compassionate and honorable.
These two young men are true role models.  Yes, they've had fun, gone to pubs, etc. as all young adults do... but they are grounded.  In watching the wedding yesterday, I loved their posture, their grace, and their genuineness.


The reason WILLIAM matters is because he is a true reminder that men can still be 'men' and yet be sensitive, articulate, graceful, and faithful to one woman... willing to commit to marriage and the fidelity of it.

When you add Kate Middleton - now Princess Catherine, Duchess of Cambridge - we see a compliment, a match... not based on wealth or status but based on her as an individual.  Kate is an educated young woman who is happy simply being herself.  She too is grounded, modern in her ideals and style and yet loves and values tradition.  She has been a role model as well.  Consider that she has been content to simply be who she is for almost 10 years without having to brag or gossip about her life.  When William suggested they break up to allow them both to consider options, Kate did not start trashing William nor did she cry out to friends or others.  She embraced the opportunity believing if they were meant to be together, they would be.  Why? She was a confident woman who knew her worth...

Six weeks later, William who admitted to being miserable without her, was back.  Let me say again, SHE KNEW HER WORTH!  Young girls (and the rest of us) could take a lesson from Kate.  We forget our own worth.

The result:  A MARRIAGE... not simply a beautiful wedding.

The wedding reflected William and Kate.  The vows, their prayer, and the themes they requested be present in the Bishop of London's sermon.  The bishop reminded us that the DECISION to marry highlighted their devotion to a spiritual life designed to bring each person into the fullness of themselves.

William and Kate matter because they are choosing to live their lives to the best of their ability, becoming their best selves AND doing it together.

Today, so many men and women have forgotten or simply never learned how beautiful and enriching this can be.  These two young people are not ruled by fear, insecurity, some macho need or a whiney sense of victimization.

They are thoughtful, graceful, devoted individuals who give us all a glimpse of the possible...

Consider what you want in your spouse or partner.  Consider the qualities of these young people... I then encourage you to WRITE down the characteristics you personally would like to strive for as well as those characteristics you need from your life partner.  You can't get what you want if you don't know what you want.  So, perhaps start by examining two young people who seem to be doing it right!  And then begin to believe that God will bring you the prince or princess your heart truly loves...